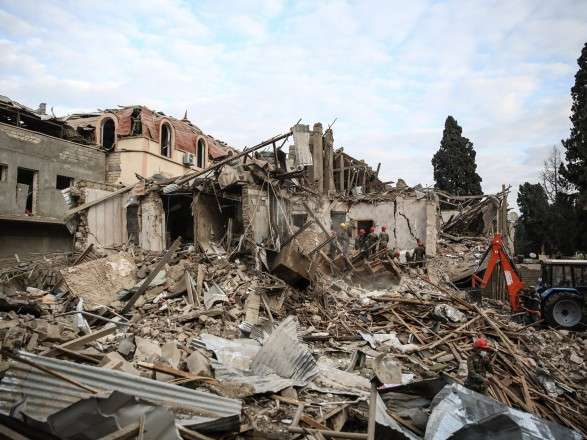 Rivals are using official social media accounts to amplify rhetoric and refute claims of attacks, but can we believe it?

The musical, historical and visual aspects of the video were meant to evoke sympathy and grief.

Armenian cellist Sevak Avanesyan was filmed playing in the snow-white and garbage-strewn Cathedral of the Holy Savior in the city of Shushi in Nagorno-Karabakh, a separatist region of Azerbaijan dominated by ethnic Armenians since the early 1990s.

Armenian officials said the cathedral came under artillery fire on October 8 in two attacks by Azerbaijani forces as part of their offensive to seize the region, which began in late September.

The resurgence of decades of conflict has sparked a full-scale information war that both sides argue reflects, distorts, criticizes and exaggerates fighting on the ground.

A cello piece entitled “Stork” was written by the most famous and tragic composer of Armenia, Comitias, who suffered a nervous breakdown after surviving the massacres of Armenians in Ottoman Turkey and died in a psychiatric hospital in Paris.

Armenia and many Western countries call the murder of up to 1.5 million Armenians “genocide”, and Turkey denies such accusations.

The music video was posted on Armenia’s official Twitter account on October 12, and the message was clear – the shelling of the cathedral by Azerbaijan, the 10 millionth Turkic-speaking state of which Ankara is its closest ally, was part and parcel of a centuries-old feud. Turks to Armenians.

This view is widely shared in Armenia, where many view the conflict as an apocalyptic struggle aimed at destroying their statehood, history and culture.

“I hope that this time we will defeat the [Azerbaijani] hordes, as we did in the 1990s, and my people will not be exterminated,” a resident of the Armenian capital, Yerevan, Mari told Al-Jazira.

But for Azerbaijan, such claims are a slap in the face.

Officials in Baku categorically deny any connection between the Ottoman-era conflict and their efforts to reclaim Nagorno-Karabakh and the sparsely populated surrounding areas that were once inhabited by hundreds of thousands of Azerbaijanis.

Baku simply rejects the very fact of the shelling.

“The information about the damage to the Shusha church has nothing to do with the military operations of the Azerbaijani army,” the Defense Ministry said in a statement. “The Azerbaijani army does not attack historical, cultural and especially religious buildings and monuments.”

Many in Azerbaijan remember their peaceful coexistence with their Armenian neighbors during the Soviet era.

During the compulsory two-year military service, Azerbaijani and Armenian conscripts often banded together to resist hazing and bullying by high-ranking military personnel.

According to Azerbaijani observers, the video from the cathedral is part of a broader campaign to defame Baku and its efforts to reclaim what belongs to them under international law and the status quo after the collapse of the Soviet Union in 1991.

“We see an unprecedented information attack on Azerbaijan,” political scientist Emil Mustafayev, who lives in the capital of Azerbaijan, told Al Jazeera.

“The Armenian side is deliberately releasing fakes – for example, about the participation of some Syrian mercenaries on the Azerbaijani side,” he said.

Numerous Armenian and international media reports claim that Ankara has hired and sent hundreds of pro-Turkish Syrian fighters to the front line.

Unsurprisingly, information warfare is spreading through the halls of power on both sides.

“I urge each of you to reveal the fakes of Armenian propaganda and bring the truth about the aggression of Armenia to the international community on all platforms! Everyone who considers Azerbaijan their homeland should raise their voice and refute the Armenian lie! The First Lady and Vice President of Azerbaijan Mehriban Aliyev announced this on October 5 on Facebook.

Her husband agrees with her and pointed out how the conflict is covered by Russian news outlets, especially after Moscow called for a ceasefire and offered to hold further rounds of peace talks.

Russia maintains a military base in resource-poor Armenia and supplies it with oil and gas.

Since the early 1990s, conflict has killed more than 30,000 people and displaced hundreds of thousands.

Many Azerbaijani and Armenian refugees fled to Russia, mostly settling in urban centers, leading to xenophobia and anti-migrant sentiment.

Despite the hardships, many migrants succeeded in Russia and defended their homeland in the social media war.

“I want you to understand that Azerbaijan stands for justice and is now returning its occupied territories,” Hasan Huseynov, an ethnic Azerbaijani video blogger with 14.3 million followers, wrote on Instagram.

The Armenian side repeats the statements.

“Sometimes there are examples of outright wartime propaganda, as is the case in all conflicts,” Richard Giragosian, a political scientist based in Yerevan, told Al-Jazeera.

He says that Aliyev, who inherited the presidency and authoritarian politics from his father Heydar, is not doing himself any favors by keeping on a leash with the domestic media and withholding information from the front lines.

For example, Azerbaijan did not disclose the number of soldiers killed, but Aliyev said he would provide details when the clashes end.

“Ironically, this secretive approach [caused] an erosion of trust and a lack of reliability that spoiled every official statement of achievement or victory,” Giragosian said.

While many Azerbaijanis and Armenians will deny any similarity between their culture and worldview, for some outsiders, information warfare is rooted in much older traditions.

Azerbaijan, Armenia and neighboring Georgia were part of the Iranian, Arab and Turkic empires before Russia absorbed the region in the 19th century.

“This is a classic Greater Middle East, when opposing sides exaggerate their successes on the battlefield,” said Pavel Luzin, a Russian analyst at the Jamestown think tank in Washington, to Al-Jazeera.

“This is not even a deliberate lie or misinformation, but part of a centuries-old culture,” he said.