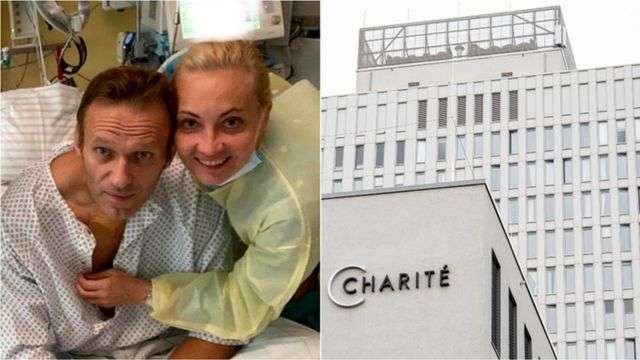 The Berlin clinic “Charite”, where the Russian oppositionist Alexei Navalny was treated after poisoning, published a report on the clinical course of his illness in the scientific journal The Lancet. The report was published with Navalny’s personal consent.

“At Charité”, doctors diagnosed Navalny with severe poisoning caused by a cholinesterase inhibitor. On September 2, the German government announced that research requested by Charite and carried out in a laboratory of the German Federal Armed Forces provided evidence of the chemical nerve agent Novichok. This conclusion was confirmed by the Organization for the Prohibition of Chemical Weapons,”the release says.

The article in The Lancet is titled Novichok nerve agent poisoning. The authors gave a detailed description of Navalny’s condition and treatment methods.

“The identification of a single organophosphorus compound is a complex and time-consuming process. In fact, the establishment of the presence of the Novichok agent and its biotransformation products in this case was achieved only a few days after the diagnosis of poisoning with a cholinesterase inhibitor and did not affect the therapeutic decisions, it says in the material.

The doctors noted that the success of the treatment was probably influenced by Navalny’s state of health before the poisoning.

“Our patient had a very favorable outcome. Intubation and mechanical ventilation within two to three hours after the onset of symptoms and the absence of previous severe hypoxia appeared to be decisive. The initiation and duration of atropine therapy during the first two days remains unclear. Fortunately, despite the high risk of aspiration during the initial period of unconsciousness and colonization with several multidrug-resistant bacteria, the patient did not develop a serious infection. His good health before the poisoning probably contributed to his recovery,”the article says.

The plane on which Navalny flew from Tomsk to Moscow, urgently landed in Omsk due to the deterioration of the politician’s condition on August 20. The oppositionist was unconscious in the toxic reanimation department of the emergency hospital No. 1 in Omsk.

On August 22, Navalny was taken by plane to the Charite clinic in Berlin.

The German government announced on September 2 that traces of a substance similar in composition to Novichok had been found in Navalny’s body. The biological material taken from the politician was examined by a special laboratory of the German armed forces. The fact of Navalny’s poisoning with poison from the Novichok group was also confirmed by laboratories in France and Sweden.

Navalny was in a coma for 18 days. Doctors “Charité” reported on September 7 that he was removed from a medical coma and disconnected from the ventilator. On September 14, German doctors informed that the politician feels better and is already on his feet. On September 22, Navalny was discharged from the clinic, he is undergoing rehabilitation.

The Russian Foreign Ministry said that the allegations of Navalny’s poisoning were not supported by facts. The head of the Foreign Intelligence Service of the Russian Federation, Sergei Naryshkin, argued that at the time of departure to Germany there were no traces of poison in the politician’s body.

As Le Monde wrote, Russian President Vladimir Putin on September 14, during a telephone conversation with French President Emmanuel Macron, suggested that Navalny “for an unknown reason” could have taken poison from the Novichok group himself.

On October 15, the European Union imposed sanctions on six Russian officials over the poisoning of Navalny. Great Britain joined the sanctions. The US House of Representatives has called on the White House to impose sanctions as well.

On December 14, an investigation by The Insider, Bellingcat, CNN and Der Spiegel was released, in which it was reported that a group of FSB officers poisoned Navalny in Tomsk. According to investigators, this was the second attempt at poisoning in two months – during the first, in July 2020, the wife of the oppositionist, Julia, was injured. Navalny and his wife took part in the investigation. The politician released a video in which he said he knew the names of the poisoners. The oppositionist stressed that he considers the assassination attempt a terrorist act organized by the FSB on the orders of Putin.

On December 21, Navalny released a video of him calling a likely FSB officer, a member of the poisoning group, Konstantin Kudryavtsev. The politician introduced himself as Assistant Secretary of the Security Council of the Russian Federation Nikolai Patrushev and “asked to clarify the points necessary to report to the authorities.” The interlocutor of Navalny confirmed the fact of the operation and said that he survived only due to a coincidence, and also said that the poisonous substance was applied to his underwear. The FSB called the conversation between Navalny with a probable poisoner.