Democrats are preparing a proposal to impeach Donald Trump. “Incitement to Rebellion” 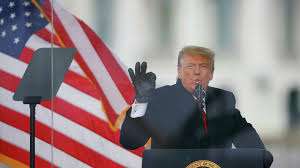 Black clouds over President Donald Trump. CNN reports that Democrats are preparing an impeachment proposal that will be presented to the House of Representatives on Monday. Trump will be charged with instigating an uprising.

CNN reporters learned about the application that the Democratic Party intends to submit next Monday. Democrats have accused the president of trying to overturn the results of the US presidential election on January 6 last November.

We will remind, on Wednesday, January 6, the Congress discussed the formal approval of the results and the appointment of the new US President Joe Biden. On that day, in front of the Capitol, Trump supporters gathered in large numbers in the capital to support the outgoing president. Donald Trump himself was present at the rally. In his speech, he said that the elections were rigged and that he should take office again.

Immediately after the speech, a crowd of Trump supporters headed towards the Capitol. He took the building by storm and began a siege for several hours. The riots killed five people, including a woman who was shot by a police officer when a door was broken open in one of the Capitol corridors.

According to Democrats, Trump openly instigated the uprising. The impeachment itself, as CNN emphasizes, in turn, will have a more symbolic dimension, because at the end of January power will pass to the new leader Joe Biden, and there is no need to remove Trump from office. This will be the second attempt to indict Trump. The first attempt, unprecedented in US history, took place in 2019.