Elon Musk held a private meeting with the CEO of Volkswagen 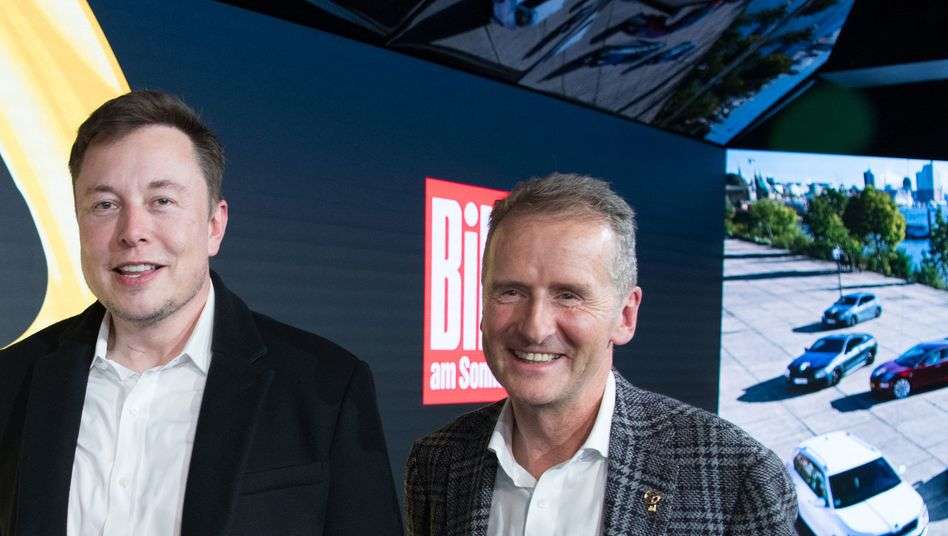 Elon Musk and VW CEO Herbert Diess are becoming close friends and this could completely change the auto industry.

It was late September night, more precisely, 21:44. At a very small airport in the German city that many have never heard of, Volkswagen CEO Herbert Diess patiently awaited the arrival of a special guest: Tesla CEO Elon Musk.

Musk had arrived in Germany a few days earlier to visit the construction site of Tesla’s new gigafactory in Berlin, followed by meetings with German politicians and work on another Tesla-related project. But before heading home, Musk took the time to test out Volkswagen’s new EV product, the VW ID.3.

“You know, this is a mass car,” Diss reminded Musk. “Not a racing car.”

“Yeah, I just wanted to see what acceleration is,” Musk replied. “What’s the worst that could have happened?” Musk asked, kicking the accelerator pedal.

Although his speed was not impressive, Musk agreed that the steering was pretty good – “for non-sports car.” Several questions followed, after which Musk dragged the car back into the airport hangar, taking a quick glance at the outside of the car as he left. (Diss recently shared all of this via his personal LinkedIn account.)

At first glance, it was a pleasant meeting between friendly rivals. An opportunity for one CEO to showcase their company’s latest product, and for another to evaluate the competition.

Let’s take a quick look at why this recent meeting between Musk and Disss is more than meets the eye and teaches a brilliant lesson in emotional intelligence, the ability to make emotions work for you, not against you.

Musk’s master plan Praise Musk for Volkswagen’s new entry-level electric car, while not overly flamboyant, shouldn’t come as a surprise to those who follow it. In fact, you can argue that VW is fully in line with Musk’s plan and stated goals.

For example, back in 2014, Musk announced on his blog that Tesla, “in the spirit of the open source movement … will not pursue patent claims against anyone who wants to use our technology in good faith.” While Tesla initially sought patents out of fear that large car companies would copy its technology and then use their vast resources to suppress Tesla, Musk soon realized that the major automakers had little or no interest in pursuing their own electric vehicle programs.

“Our real competitor is not a small trickle of third-party electric vehicles produced, but rather the huge number of gasoline cars that are poured out from global factories every day,” Musk wrote.

Tesla’s share price skyrocketed, with a market cap higher than Volkswagen, Toyota and GM combined. With a massive shift in society’s outlook on sustainable energy and EVs, legacy automakers are struggling to promote their own EV platforms.

At this stage, Musk could focus on saying, “I told you so.” Instead, he was happy to thank Diess and VW for their efforts. “Herbert Diess is doing more than any major car manufacturer to switch to electricity,” Musk wrote last year. “The welfare of the world should come first. Anyway, he has my support. “

It’s also interesting to compare Disss’ attitude towards Tesla with that of former VW CEO Matthias Müller. Mueller, who was succeeded by Diss in 2018, openly ridiculed Tesla for its low sales a few years ago. In contrast, Diess praised Tesla for its success in battery manufacturing, openly stating that VW has “a lot of respect for Tesla.”

By praising each other rather than joking, and by focusing on finding ways to collaborate rather than competing, Musk and Diss open doors – and that could lead to great success in the future.

For example, just a few months ago, Musk came across an article detailing the efforts of German automakers to bridge the gap between Tesla’s technology and their own.

As I wrote earlier, the deal between Tesla and any of the old automakers is a heavenly alliance: for the old guard, it is access to what is likely to equate to a five-year leap in technology. This is a chance for Tesla to accelerate its mission (and make billions) by taking advantage of the vast manufacturing and logistics networks of major automakers.

And given the friendly relationship between the two executives, it’s safe to say which traditional automaker has the best chance of making just such a deal.

However, knowing that this recent meeting may give rise to rumors, Diess felt it necessary to calm situation:

“To be clear, we just drove on ID.3 and chatted – no deal / collaboration is going on,” the VW executive wrote on LinkedIn.

In any case, there is no deal yet. Let’s see what the future holds.

But regardless of the end result, both Diss and Musk taught a valuable lesson that anyone in business should heed:

To achieve the greatest success, focus on making friends. Not enemies.